20 of the most ridiculous British holiday complaints

Good morning. My name is Sofia and welcome to another edition of MyTravelMoney TV. In today’s fun fuelled episode, we’re going to take a look at 20 of the most ridiculous, astonishing, stupid, crazy and thought provoking British complaints we’ve come across.

As Brits, we love a good bit of complaining. So without further ado, here are the top 20 most ridiculous British holiday complaints! 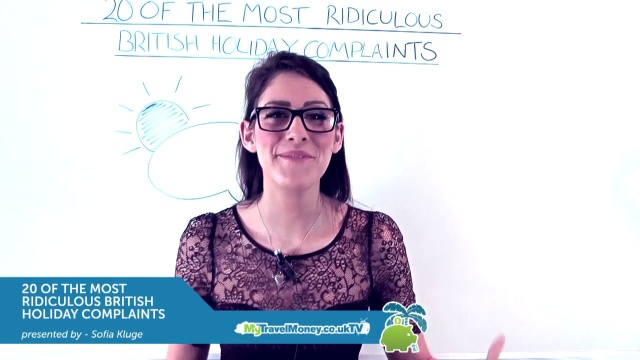 1. “I was holidaying in India and disgusted to find that almost every restaurant served curry. I hate spicy food!”

3. “Topless sunbathing on the beach needs to be outlawed. My husband spent the whole time prying on other women.”

4. Enough of French people. The receptionist speaks only French. The food is always French. There are too many foreigners living abroad.”

5. A man who travelled to Marbella had an issue with the all you can eat buffet, there was too much food. He put on a stone and subsequently complained.

6. A husband could not bear the passionate lovemaking of the next door neighbours in Bulgaria. He felt pressured into initiating sex with his own partner.

7. “The sea is too bloody noisy on this Mediterranean cruise.”

8. A woman who travelled on Celebrity Cruise lines asked for a refund as she didn’t spot any celebrities on board.

9. “No one mentioned there would be fish in the sea. The kids were scared.”

10. “The roads were too uneven in Thailand. The journeys became uncomfortable.”

11. “Why am I getting bitten by so many Mosquitos? Nobody told me they bite!”

12. “My partner and I booked a twin bed room. They actually only gave us a double bedded room. It’s now your fault she’s pregnant.”

13. “We flew home from Jamaica and it took a whooping 9 hours. It only took those Yanks 3 hours to get back home.”/strong>

14. A hotel guest in Sydney, Australia was complaining about his soup being far too thick. He was actually diving into gravy for the past couple of days.

17. “You’re the tour operator in Benidorm. You need to tell us about noisy and unruly guests.”

18. “It’s out of order that the local store does not stock my usual sample of biscuits like custard creams or ginger nuts.”

19. “How can Spanish shopkeepers close during the afternoon! Siesta time doesn’t happen in the UK so shouldn’t happen in Spain.”

20. “There was no air-conditioning while I was queuing outside. Why on earth not!”

So, there you have it! 20 of the most ridiculous British holiday complaints. We hope you enjoyed today’s episode of MyTravelMoney TV. If you have any more to add to the list, feel free to contribute to the comments section below. You can also tweet us @mytravelmoneyuk and make sure to tune in next week.

Thank you for watching and we look forward to seeing you next week.

With special thanks to:

AOL, Wanderlust, The Poke & The Telegraph

Curated by Sofia Kluge on Google+