Flying with kids: dealing with the inevitable

You’ve booked your holiday, been extremely organised for once, (planned outfits for each meal, that sort of efficiency), and then the panic sets it; the long-haul flight with the kids must be accomplished and you are already practicing apologetic facial expressions in the mirror, ready to employ when fellow passengers shoot you looks of absolute abhorrence.

You may not be able to prevent your kids from screaming, crying and throwing up between A and B, but luckily there are just a few things that can minimise the chances of yourself having a nervous breakdown, or other passengers for that matter…

Flying is exciting, or so you tell them
The idea of being rushed 10,000 feet in the air may not seem the most thrilling form of travel, especially with kids in tow; the thought of your daily commute to work may even seem quite appealing in comparison. But for energetic little ones, the idea is exciting, so play on it; things as minute as counting houses, passengers or crumbs on their trousers will keep them occupied for hours; as long as you are equally excited by the idea, or at least act it.

Plane food does the trick
Preparing ‘plain’ meals up to two days before travel can reduce sickness during flight by up to 60%. Sound tempting? Of course it does, so as unappealing as bland food may seem, it can’t be worse than the humiliation of your toddler throwing up in a duty-free bag.

Layers, clothes, not layers like onions
Something as simple as layers, with buttons that can be undone before kids exclaim ‘I’m too hot’ and zips that do their job when they’re ‘too cold’ can save a lot of hassle and unnecessary whinging. There is no need for them to be dressed to the Nines unless it’s for a worthy occasion, which let’s face it, isn’t on a flight to the Canary Islands at 3am.

Bear Essentials
Our bare essentials may comprise of make-up, tea, sun cream etc. but kids just want their teddy bear. Yep, it’s still about the kids; don’t drift off in to holiday miniatures excitement just yet! Being as considerate as taking they’re dog eaten cuddly toys on board will encourage routine sleep and essentially yours too. Everyone’s happy.

Stop-off, or don’t…
Kids love jumping around causing havoc, particularly at high altitude not to mention long haul, so why endure it for 6 hours? Stopping off in-transit will give them some time to run laps round departures; cheerful noises blending in nicely with the buzz of other holidaymakers. If however takeoffs and landings are usually accompanied by screams from popping ears, then you may not want to undergo more than necessary and may wish to tolerate the long haul after all… 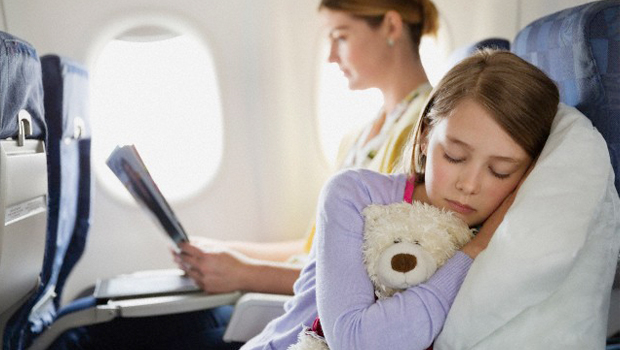 Introduce the air police
That’s ‘air’ not shopping-police. You might have spent too much at duty-free but this time they’re after your kids not you. Mentioning ‘I’ll have to call the air-police if you carry on behaving like this’ at any given point tends to stun children hanging up-side down off their seats in to an instant motion ending face-forward, belt in-tact in absolute silence. If however the response is disagreeable and the look of panic on your darling’s face is closely followed by a horrific cry of alarm, then a few words of comfort and a game of i-spy should have an equally calming effect.

Keep them medicated
Calpol is a Godsend, so take it right up in the sky, thank the stars for such a miracle and administer as and when needed. Poorly infants suffering from earache and boredom self-induce fever and can become unpleasantly aggressive. Please note, self-administration is not advisable and passengers pleading for shots of medicine should be rejected and swiftly followed instead with the offering of earplugs as a kind gesture and form of goodwill.

While pouring all your efforts into project managing your offspring’s on-board behaviour, do not take your eye off your own ball. Take care of yourself and the rest will take care of itself. If you are in good form, you’ll be far more able to cope with the inevitable tests thrown at you by your errant progeny.