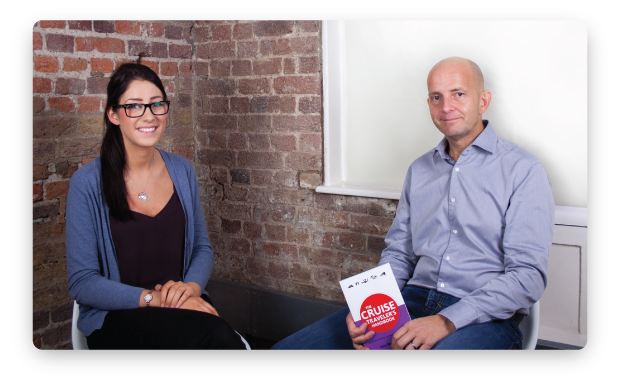 Hi there and welcome to an exclusive episode of MyTravelMoneyTV. We are delighted to have the opportunity to interview and welcome Gary Bembridge, a cruise connoisseur, travel writer and conference speaker! Gary has published a number of books including his latest release: ‘The Cruise Traveller’s Handbook.’

So Gary it’s great to have you, I guess we’re dying to know, how did you go from loathing the sea to absolutely loving it and having a complete passion for cruising. How did that happen?

So I guess I probably had a stereotypical view of cruising like most people. I probably thought it was for old people, there’d be nothing to do, I’d get sea-sick, you know all those kind of stereotypes. So I never went cruising at all because I thought it was a terrible idea. And then suddenly I had to go cruising because I was invited to talk at a conference on a cruise ship, the Aurora in fact. So I just went, I thought well I’ve got to do this talk. So we got on the ship and as we set out at Southampton I just got it, you know as we headed out to sea. Bizarrely it was quite rough at sea and I realised I didn’t get sea-sick. But it was just that magical thing on being on a ship out at sea I just suddenly realised what it was all about. Then being on the ship I realised there were loads of things to do, the ship was just huge, there was great food and entertainment and that kind of just got me hooked and I thought I’m going to do this properly and got on the Queen Mary II.

Wow, and so was this the start of you travelling every month for the last 25 years?

I had a European Global Marketing job and I was travelling almost 2 or 3 weeks every month. So the last 25 years I’ve done that. The last 2 years I have now focused full time on writing, my blog, making travel videos so I still travel the same amount. I have captured everything I do and kept a list of everywhere I’ve been.

Where do you think is the ideal place for the first time cruiser?

I think for the first time cruiser the best place to go is wherever is close to them. So if you live in the UK for example, Southampton or Dover or whatever, then just go on a really short 4 or 5 night cruise around Northern Europe so you just get a sense of what it’s like being on a ship. You don’t have all the hassle of flying; you can just pack and go. So I think that’s the best thing to do, to just get a taste of it. Similar to what I did, it was just a couple of nights to get comfortable at sea, you realise what the place is like, that there’s loads to do and if you don’t like it that much, you’ve only got a couple of nights left. And it’s actually really cheap because those 3 or 4 night cruises are really cheap. Anything from £100-£300 and the same again in the USA you have a lot more choice because there are something like 20 different ports you can sail from including those trial cruises. That’s definitely my piece of advice for first time cruisers.

Great. And where have been your favourite destinations?

And for people that perhaps aren’t too swayed by the idea of cruising and perhaps prefer the traditional package holiday. Why do you think cruising is a better alternative?

It’s funny actually because people that like package holidays, generally prefer cruising to anybody else because it’s a very similar concept. You have all your accommodation, food, and entertainment, for kids you’ve got kids clubs, lots of interactive stuff. You know you can meet lots of people, so those that like package holidays and resorts and all those kinds of things will find this great because you meet new people and can stick to a budget. The advantage however of cruising, is that you wake up in a different place each day. So you have all the benefits of being at a resort with all the advantages of being in a different place each day. And I’ve found that the people who like cruising more than anybody else are literally those people that like package holidays and resorts. The thing is a lot of ships nowadays are designed like resorts, like the Royal Caribbean, Carnival and MSC, they’re really going out of their way to be more like destinations.

Is there anywhere you would like to go that you haven’t already been to?

Two places absolutely. I haven’t been to Alaska yet, it’s my New Year’s Resolution that I’m going to go to Alaska no matter what for work or leisure. I was always really sceptical about going to the Norway Fjords, I thought it was like an old people’s place and then you just realise the beauty of it, you know the ship gets right in about 100 miles in land and you’ve just got the sheer mountains either side and everyone who’s spoken of Alaska has said the same thing. So that’s Alaska. The other place I really want to go to is Antarctica. Before, if you wanted to go to Antarctic it was about roughing it, you know adventure ships whereas I prefer something a little more comfortable. However it is becoming a much more common thing so Silversea and Seabourn and many other smaller ships you know that are designed for the region are becoming more common. But yes I would love to go to Antarctica. Those are the two hotspots.

Are there any things that you would recommend first time cruisers to bring on a cruise that they wouldn’t bring on a normal holiday?

The great thing about going on a cruise is that if you’re going from a homeport is that you can take absolutely anything. There are absolutely no limitations. So that’s another advantage really you can just keep packing until you run out of suitcases, if you’re flying you’re limited. One of the key things is, it depends on your cruise line really but a key thing is dress code. As a first time cruiser you need to think about dress code, so if you’re going on for example Cunard, there are lots of formal nights with ball gowns you know black tie you need to make sure you’ve got the right set of clothes for those different kind of events. If you’re going on a more casual cruise line like Norwegian, it’s less so, then its more casual, more what you take on your normal holiday. So it’s very much a dress code thing. The second thing I would mention is make sure that you’re taking a first aid kit. Obviously you’re at different ports and the ships don’t have a chemist so if you need headache pills or whatever then take a little kit of medication because ships can’t sell it. So it’s good to have a little set of those kinds of things and it saves you from going to the doctors or whatever. The third thing is thinking about what ports you’re going to because although everything you buy on board you can pay with credit card, if you’re going to different locations, you’re going to need money to buy taxis or go to the markets or whatever. So it’s good to think about money suitable for wherever you’re going to. They’re probably the three things I would recommend taking.

Obviously cruise ships have come quite a long way in the past 10 years. Do you think they will continue to evolve do you think they’re at their best now?

I think the priority is innovation on cruise ships. Cruise ships are largely the same sort of structure; its more what’s inside that’s different. So every cruise liners is trying to find a way of changing and making themselves different. So I do think we’ll see a lot of change, particularly as they’re trying to attract more first time cruisers going back to your initial question. They’re trying to find things where if people are more sporty or family orientated then I think we’ll see a lot of change and innovation and things will keep evolving. There’s been a trend to build really big ships and I think that actually what is going to happen is we will see ships getting smaller and more targeted ships for particular destinations. You need ships that can deal with ice and just a lot more specialist ships really. But I think every cruise company is trying to find the next exciting thing whether it’s ice-skating or theme parks or whatever.

Do you have a favourite cruise liner at all?

Moving on to your book, ‘The Cruise Traveller’s Handbook’. Where can fans buy it?

Pretty much all the big online booksellers such as Amazon on paperback and as an e-book. Places such as WH Smith online as well but mainly Amazon is I guess the best place for anyone in the world to get hold of it.

Lastly, we’d like to ask you, where do you tend to buy your travel money when you go on cruises?

I guess two ways really. One way is I guess when you’re on the ship you pay by credit card. But I guess when you’re at port, you want to go and explore and I try and take little excursions and take small amounts of cash. So what I would tend to do is take local currency, in most regions you can pay in US Dollars obviously in the Caribbean and places but even in places such as St Petersburg they will take US Dollars. But I tend to buy my currency online, because you get the best rates actually via mytravelmoney. If I’m going to lots of different places I tend to take mainly Euros and US Dollars. I’ve got a trip coming up where I’m going to Asia and what I’ll do is take small amounts of each of those main currencies because when you get off the ship I think you should take part in the local culture and take part in the excursions. So I think always go out with a little bit of money so you can make the most of the different locations.

It’s been really great having you Gary and thank you so much for sharing your expertise with us and we really recommend our viewers get hold of ‘The Cruise Traveller’s Handbook’. We hope you’ve enjoyed this video and we look forward to seeing you next week.

Thank you for watching and goodbye. 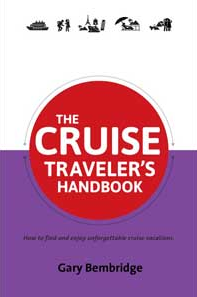 ‘The Cruise Traveller’s Handbook‘ by Gary Bembridge is available to buy on online as paperback and e-book. Team MyTravelMoney wish Gary the best of luck on his cruise adventures and future publications.