With millions of us flying every year, there is a lot we have to question, things we want answered…Why our ears pop? Why tea and coffee taste a bit odd? Yes you were’t alone on that one! There’s actually a reason for that! Intrigued? Read on…

Why doesn’t my tea taste like a normal cuppa?
Tea on earth is made with water that has been heated to boiling point (100C). Unfortunately, a thousand feet high, in low pressure cabins, the boiling point of water is lowered to 90 degrees, which essentially means it is no longer being ‘boiled’. Without boiled water, it is virtually impossible to brew your tea to a similar standard as that in your home, and so your tea will taste slightly different in-flight.

Why do I get Popping Ear Syndrome?
As the plane climbs a thousand feet sky high, the atmosphere around us changes very quickly; faster than our bodies can adapt to it. Cabin pressure is maintained to 75% of normal atmospheric pressure, a pressure very similar to high-altitude towns in the mountains. As a result, the air that is in our bodies starts to expand, which can be very uncomfortable. Luckily to ease this discomfort, we can ease the pain by swallowing, and holding our nose and gently breathing. Making ourselves yawn also works well, and even better still, it starts to make induce a feeling of tiredness which is brilliant on those journeys where you are struggling to sleep or suffering from jet-lag.

How safe is flying?
Statistics show that ‘the risk of being killed in a plane crash in any particular year is one in 125 million passenger journeys.’ That should really be the end of that answer and enough to put your mind and worry at rest. Road accidents are far more frequent as we are amongst many other travelling vehicles. Airplanes are extremely safe, particularly when not surrounded by traffic, it is highly unlikely for your pilot to get in to a spot of bother with his aircraft. 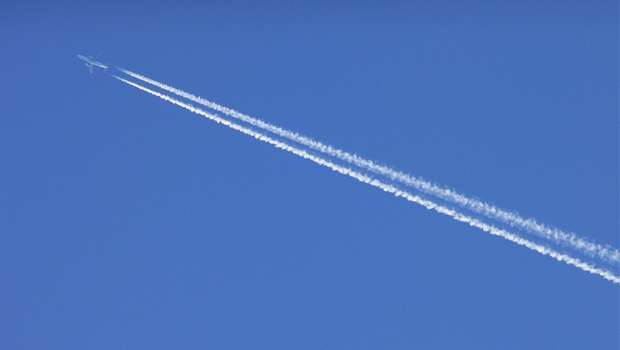 Why do planes leave long white trails?
These are called vapour trails, a combination of carbon dioxide and water produced when the aircraft fuel is being burned and emitted. This emitted gas is extremely high and as soon as it comes in contact with the cold temperatures of the high-altitude atmosphere, it forms in to tiny ice droplets and crystals. Of course, when flying at high speed and high-altitude, an aircraft produces colossal amounts of these ice crystals which in turn, leave behind a long white trail.

What if the plane gets hit by lightning?
Turbulence is caused by a sudden change either in temperature or wind direction in the outside air and it is very normal. So normal that it has been unheard of for an aircraft to have ever been brought down by it. A pilot will aim to avoid turbulence by flying around the storm due to the scare and discomfort it can cause passengers. If you do happen to pass through a raging storm, you are still very safe and in the best hands for a metal container is about the best kind of shelter in such a situation.

What if someone tries to open a door?
Before take-off, cabin crew will be instructed to put the doors to automatic. This instruction basically puts the inflatable evacuation slide in to an automatic mode whereby they will be initiated as soon as the doors open. As for the doors, these don’t need to be locked because as soon as a plane is airborne, it is virtually impossible to open them due to the cabin pressure being exceedingly higher than the outside atmosphere, thus ‘locking’ and sealing them in to place.